The first time we arrived at Mammoth Lakes was a bit scary, the winds were strong and we went through turbulence. We finally landed on our second attempt! When we got off the plane, sure enough the wind was pretty strong. After we ate supper we drove to the camp site. It was already dark when we arrived, we didn’t get to meet everybody but we met with the main people.

Monday started off pretty good, we got up at 5:30am and breakfast was served at 6:00 am. After breakfast we took off for the day. First place we stopped was a town called Bishop where we did some shopping for gear that we needed and where missing. After that we went to a place called Good George, along Owen’s River, and had a lecture of the Bishop tuff. The next place we went to was Lookout Mountain, it was a good view of the long valley Caldera, and we had another lecture there. The next stop was Obsidian dome, a volcano that erupted 550 million years ago and most recently at 76 thousand years ago. The last place we had our lecture was on highway 120, looking at bloody canyon. Bloody Canyon is an example of the erosion from a glacier that has flowed down from a mountain into the valley. After the lecture we stopped and smelled the alkaline water of Mono Lake. It was very salty and had an interesting shoreline with a tufa tower. What a neat place. We had a perfect ending to the day when we went to a place called Hot Creek and jumped into a hot spring. It was nice to jump into the water after being so hot all day long.

On our first day at the Little Poleta (see Photo 1), we learned about the different rock layers. We sketched Little Poleta from two different angles and hiked around to get familiar with the four different map units for the area. 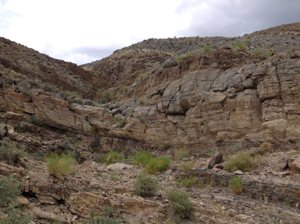 On Wednesday, we had a half day due to weather. When we woke up it was snowing and then started to rain. All the students had time to catch up with their paper work. After lunch we headed back to Little Poleta and this time we started at Rattle Snake Canyon (see Photo 2) and we learned how to measure strike and dip with the right hand rule. With the Jacob’s staff, we learned how to measure the angles of dipping bedrock units.

On Thursday we had another half day due to weather, again. That morning, we ended up going to town, one group went to Big Pine to take showers and do laundry, and the other group went to Bishop to go do some shopping, drink coffee and relax for a bit. Before noon we went back up the mountain and got back to geology. The last few days that we had on Little Poleta, we had no more weather days. The sun was shining along with some clouds and a wonderful breeze. We were taking strike and dip measurements with our compasses to help us sketch out the geometry of different rock units on graph paper.

Each night after supper we had time to work on our maps (see Photo 3) and sit by the nice warm fire to talk about the work that we were doing and sometimes someone would play the guitar for entertainment and sing. One of the popular songs that was played was “The Weight”, and I enjoyed listening to that song every time it got played. It was a very good camp fire song.

Photo 3: Randy, Eddie and Karlene working on their maps and the map I produced. 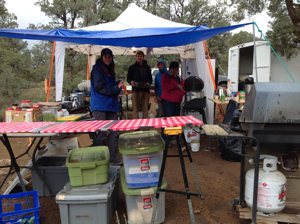 Photo 4: My group and I helping with supper.

Of course we had chores to do every day. Different groups had to do different chores. There were breakfast, supper, and after supper clean up crews (see Photo 4).

On the morning of May 25, before we were leaving the Inyo Mountain, six of us got up at 4:30 am to watch the sun rise, overlooking Mount Whitney. It was cold but the sunrise was beautiful. This day was our last day of cool weather.

When we arrived at Death Valley, it was crazy hot! Way too hot for a person like me from the high arctic! When everyone was unpacking the trucks and the trailer, I sat in the shade with a frozen left over supper from the night before and I put it on my legs. The frozen leftovers helped a lot with keeping me cool as well as sitting under a tree. When Mike asked me if I wanted to stay at the camp ground or if I would prefer the hotel, I picked the hotel without any second thought. The heat was too much for me to bare! Pretty much every day, my body would expand because my blood was trying to keep my core cool. In other words, if I chose to stay at the camp site, I would have had heat exhaustion if I didn’t stay at the air conditioned hotel, and lucky for us, the hotel had ice machines and we were able to have nice cold drinking water. When we chose to be at the hotel, I felt embarrassed because the other field school students were looking at us weird, and it felt like we were treated a bit differently within the group because we couldn’t take the heat.

Photo 5: Old mine shack in Death Valley somewhere in the canyon. 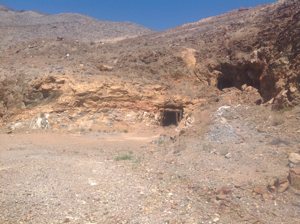 In Death Valley we got to go to one of the canyons. I did not like it in there, it was hot and no wind and barely any shade (see photos 5 and 6). Did I mention it was way too hot? Well it was, for me anyways. The other place we went to is a part of San Andreas Fault System. That day was a very hot day, no wind and barley any clouds, but we saw planes flying around. After that we went to another place in Wild Rose Canyon, and identified about four faults. Sometime that week we also took a tour at the Sterling Gold Mine. It was a good day and we got to learn about the processing plant, what kinds of things they look for when they are testing and took a bit of a tour of the mine sight, but we never got to go inside an actual mine.

The places we went to for fun were a Sand Dune near the camp ground in Death Valley national park and on our way to Las Vegas, Nevada we stopped by Bad Water Basin (see photo 7). 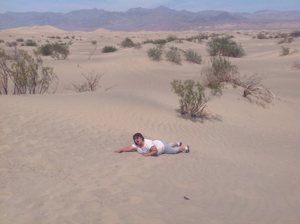 The first week of Field School was fun and not too hot. I got to learn a lot about taking strike and dip measurements, measuring different rock layers, mapping, recording measurements onto graph paper, learning about different folds and faults and got to learn about different minerals that I haven’t seen physically before. During that first week I had fun learning. And I enjoyed the bonfire at nights, it kept me and other people warm.

On the other hand, I DO NOT like Death Valley weather, it is way too hot and it made it hard for me to concentrate on learning. I was a bit more focused on when are we going back to the hotel! Every morning I would be looking forward to get into an air conditioned place and get away from the heat, but I enjoyed the evenings when it wasn’t too, too hot. The temperature would go up to and over +120°F during the day and +90°F at night. I DO NOT miss the heat, I still dread the hot days that we had in Death Valley.

I had an amazing time with everyone at the camp and learning about Little Poleta was great time.