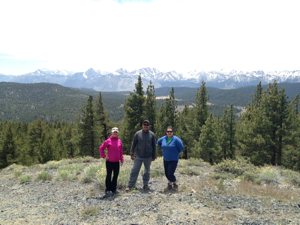 My name is Karlene Napayok. I recently graduated from the Environmental Technology Program (ETP) at Nunavut Arctic College in Iqaluit, Nunavut. I heard about this field school a couple of times during presentations made by David Mate and Holly Steenkamp from the Canada-Nunavut Geoscience Office (CNGO). After listening, I thought I should challenge myself and really get out of my element and give this geology thing a shot. I learned a little geology during my first year in ETP and thought that this would be a great refresher for my understanding of Earth Science. This opportunity to participate in a field school in California has enabled me to learn so many new geological techniques and skills as well as preparing me for field work on southern Baffin Island this summer with the CNGO. There were two students from first and second year ETP chosen for this field school (myself and Randy Hinanik) and also a student from the Inuit Learning and Development Project (Joanna Panipak) here in Iqaluit, Nunavut (see photo 1). 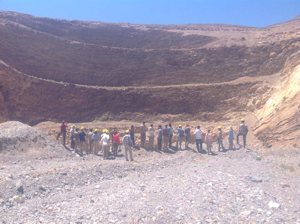 Photo 2: Students taking a tour at the Sterling Gold Mine, Nevada.

During this field school we met students from Dalhousie University in Halifax, Nova Scotia. They came from cities from all over Canada to earn a degree in Geology. They were all third year students and had the chance to take this field camp to earn 3 credits towards their degree. They were two weeks into field camp when we arrived; they were awesome and friendly and had some questions about the North (see photo 2). 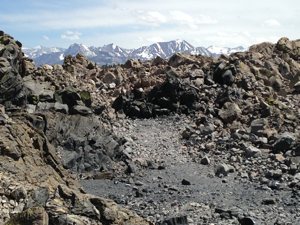 On our first day we took a field trip up to the 8300 ft Lookout Mountain in the Owen’s River Valley and enjoyed our lunch after a lecture. Afterwards, we went to Obsidian Dome which is a mile-long, 300 foot high lava dome that is part of the Mono–Inyo Crater volcanic chain located in the Inyo National Forest. The Dome is essentially a big pile of shiny black volcanic glass that was formed by an explosion (a phreatic blast) when magma reached the water table causing the water to steam in turn quenching the magma into rock . It is located north of Mammoth Lakes, just south of June Lake, along Highway 395 (see photo 3).

Back at camp, there was a schedule to follow that included preparing supper for the whole group which included washing dinner or breakfast dishes, or preparing breakfast at 5:30AM as well as setting out food items so students could prepare their own lunch for the day. It was critical that I brought lots of water with me as the temperatures were routinely above 30 degree Celsius. Other important daily items not to forget were sun screen, lunch, hiking boots, field note book, hand lens, map (topographic map/satellite image) and depending on what we were doing each day, a Jacob Staff tool to measure the sedimentary layers at Rattle Snake Canyon. 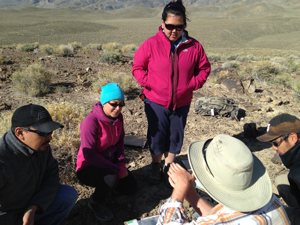 During the first few days the weather wasn’t cooperating. We had high winds, snow, and rain and hail storms. We stayed at camp and had lectures about rocks and minerals and the information we needed to use to identify them, e.g., texture, color, density, taste, streak, hardness and general location.

Our main project was mapping the Little Poleta map area (see photo 4) out in the field, which was a 20 minute drive from our camp site (Camp Nelson). This was a perfect spot for learning how to map and make a geologic cross section. Only about 10,000 university students throughout the years have been to this site! When we got to the top to investigate all the contacts, we drew a sketch of what we saw.

The university students were doing their major project on the Big Poleta map area which was a 10 minute drive from our location; they had a much larger area to cover, making strike and dip measurements and also working with a partner in the field. 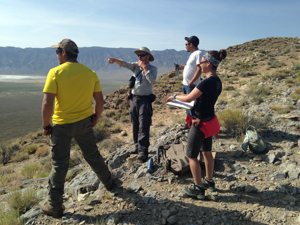 At Little Poleta, (see photos 5 and 6) we visited each geologic unit and labelled what type of rock it was, the relative age of the unit and whether it was preserved in an anticline or syncline. If it was an anticline fold the youngest rocks would be at the edges and the oldest in the centre. We also learned how to determine which way folds plunge, and how to use our compasses to record strike and dip. This was valuable information for completing our cross section later on. We also learned why it was important to write clearly and neatly using a pencil on our maps and to refer to our field notebooks regarding observations we made in the field.

At Rattle Snake Canyon we learned how to measure the strike and dip of different rock units and how to properly record them in our field notebooks. This included explaining in as much detail as possible what we saw and measured. Using the Jacob Staff I learned how to accurately measure the different thicknesses of rock units. 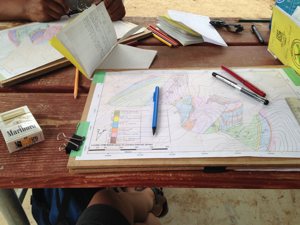 After we moved camp to Death Valley, I also learned about alluvial fans at Wild Rose Canyon located off Hwy 178 just past Stovepipe Wells and Red Wall Canyon. John Gosse, a Professor at Dalhousie University gave us the explanation. An alluvial fan is a fan- or cone-shaped deposit of sediment crossed and built up by streams. If a fan is built up by debris flows it is properly called a debris cone or colluvial fan. These flows come from a single point source at the apex of the fan, and over time move to occupy many positions on the fan surface. Fans are typically found where a canyon draining from mountainous terrain emerges out onto a flatter plain, and especially along fault-bounded mountain fronts (see photo 7). 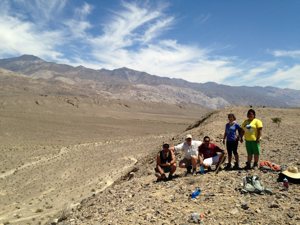 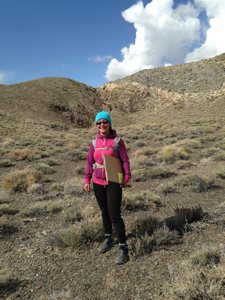 I gained so much knowledge and had a great experience during this field school. I got to see unbelievable scenery first-hand. This experience has prepared me for my upcoming summer job with CNGO. I would like to thank Michael Young, John Gosse and all the teaching assistants for their help on assignments as well as the rest of the students making this time a memorable one! I feel like I have accomplished so much and proved to myself that I could survive and even thrive in the variable conditions and rigors of field work. (see photos 8 and 9).